Every brewery has its own style. There are the science buffs, who rely on organized spreadsheets, strict ingredient measurements and counting yeast cells in a petri dish to make sure attenuation is just right. Then there are the artistic types, who rely more on “feeling” and inspiration to create new brews on the fly. Then there are craft brewing’s political moderates, who prefer the level of organization necessary to keep a tight ship running smoothly, and are also ready to change course if a recipe route isn’t leading to the right place.

At Ex Novo Brewing Company in Portland, Ore., Jason Barbee is somewhere in the middle. Part scientist, part creator and part innovator, Barbee is the loveable mastermind behind Ex Novo’s new brews, which run the gamut from traditional Northwest amber to a saison packed with jackfruit. One thing that’s certain is, he’s here to mix things up.

Ex Novo Brewing Company opened in July 2014 under the direction of Joel Gregory, a young, even-tempered engineer-turned-brewer who gives the striking (albeit unlikely) impression that he opened this business overnight. The industrial space is sleek while welcoming: over the bar, a versatile beer list hangs over a row of just-cleaned taps; an equally adaptable food menu on the bar displays upscale-made-affordable small plates and sandwiches; and, neatly placed without sterilely uniform, high rectangular and low circular tables fill the majority of the front space, with booths against the wall, and kitchen hidden behind and a well-maintained brewery in back.

“This is my first brewery job, the one that I started,” says Gregory, who previously worked as an engineer in the electrical and renewable energy fields but felt his profession lacked creativity. “I like [engineering], but I never really felt I had any creative outlet and I wasn’t very good at it. I was always more business minded and creativity minded.”

The brewery’s name, “Ex Novo,” is a Latin phrase translating loosely to “from scratch”—an appropriate epithet for a business conceived of and set afloat with little guidance—and virtually no brewing experience.

If it’s a creative business he wanted, that’s certainly been accomplished—on top of his unbiased, nascent perspective on professional brewing, Gregory is planting a flag in wholly unchartered territory. Ex Novo is not only built “from scratch,” but is “the first and only nonprofit brewery in the country,” he tells us. After taking salaries and brewing expenses out of business revenues, his profits go to a selection of community-serving organizations that need money more than he needs a bigger house or new car. 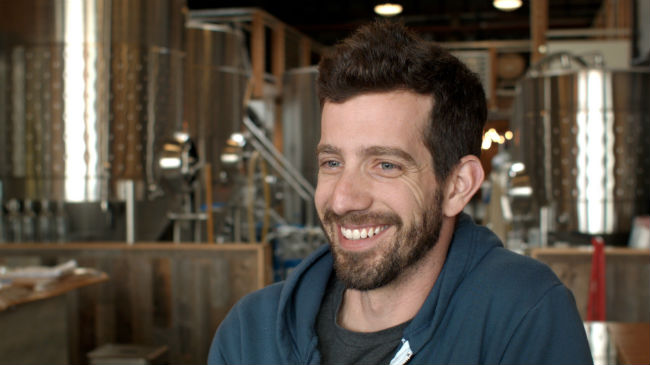 As a homebrewer of five years with an itch for new ventures and an interest in nonprofit work, Gregory eventually came to the conclusion that opening his own nonprofit brewery would be the best and only way to combine his passions for beer and giving back. “A lot of [nonprofit] programs don’t need people, they need money,” he says. “This business model works—or can work if you do it right. I want to help that way.”

According to Gregory, the way to “do it right” is “being consistent and solid, and building something that people trust.” That’s hard to measure after just eight months, but being trustworthy is built into his business model; Ex Novo currently holds a commitment to four regional and international nonprofit organizations at $25,000 each, and has chosen a head brewer who has over six years’ experience at one of Portland’s craft beer mainstays, Deschutes Brewery.

The brewery currently runs as a three-man show with Gregory at the top as founder and general manager, Barbee as head brewer and Tommy as assistant brewer. In Gregory’s words, the brewery specializes in “lean, drinkable beers” that “occasionally get weird”—a description that may be hard to understand until you’ve tried them.

“We try to have something that anyone can walk in [and enjoy], whether they’re the farthest spectrum of beer geek or total novice,” says Gregory. He and Barbee agree that Ex Novo should, at least for now, incorporate a mix of styles agreeable to Portland’s many discerning palates. “We want to do those things and do them really well,” Gregory says.

Currently, that translates to brews like Damon Stoutamire, a balanced stout with dark chocolate, roast and slight coffee ntotes; How the Helles Are Ya’, a crisp, light lager with full body and German beechwood smoked malt; the self-explanatory Hoppy Pils; and Red Red Wheat, an amber wheat ale brewed with specialty malts and hops yielding sweet caramel and finishing off with a hint citrus. In case you think you’re getting the picture, there’s also the game-changing Jacked-Up Farmhouse, a fruity sour beer brewed with eight gallons of jackfruit, the origins of which beg an entire story of its own. In other words, we’d say the new breweries beers surpass “drinkable” and lean more toward novel, fresh and inventive.

Barbee, like many brewers, takes a seasonal approach to recipes and tap lists, requiring he always be thinking ahead. “We tend to brew seasonally and brew to what we want to drink,” Barbee says. “Right now, given that it is still not great outside in Portland”—he gestures to the floor-to-ceiling windows, whose view likely mirrors the concrete gray floors we stand on as the city’s daily dose of gloom rolls in—“we’ve got a peated Scotch ale, [which is] a bigger, boozier malt-forward beer, a traditional Northwest amber, in which you get a little more of that malt character and a lot more body coming through with a lot of hop, and we just transferred an imperial IPA yesterday. We try to think, ‘what will we want to be drinking four to six weeks from now?’”

At the time of our visit, on March 20, the first day of spring, Ex Novo has a few fermenting beers on deck that evidence its—and Barbee’s—versatility when it comes to an inaugural spring lineup. There’s a Maibock in one fermenter, readying itself for a lagering period that will precede its release in about six weeks; there’s a not-yet-released two hop double IPA that’s now, as I write this, on draft as Dynamic Duo IIPA, and in another metal fortress is a soon-to-be Belgian wheat with lime and juniper, meant to emulate a gin and tonic. The best seller, Barbee says, is the Eliot IPA, a creation he admits is not yet perfected. It’s also the one he brews the most, exemplifying why Ex Novo is the right fit for him.

“I have a lot more freedom here,” he says. “We’re so new that everything is still in development, which is fun. Even in our core brands, the recipes are so much in development; I have yet to brew Eliot the exact same way. I’m still trying to iron out the recipe to be exactly what we want.” Though he bears no hard feelings toward his past job, his position here at a brewery not yet a year old, and an innovative one from its very foundation, noticeably contrasts the six and a half year tenure as a Deschutes brewer. “[Each] new beer makes it exciting and fun to brew. There’s no set in stone recipe or magnate, and I don’t think that’ll ever happen.”

Though we didn’t know it at the time, Barbee sums up precisely what makes Portlandia a brewtopia, stating the sentiment of many Portland brewers:

“[Portland has] a really interesting beer scene because we really have the best of the best in terms of all the raw materials. Hops are all grown very locally, within driving distance…Wyeast is, in my opinion, the best yeast lab and they’re an hour from here. We have really good water. Great Western Malting and Country Malt Group are 10 miles from here. We have very good access to very high quality ingredients and lots of them.

“Plus, because we have such a loyal beer crowd, we get to be on the cutting edge of everything and people are accepting of that. We can brew whatever weird thing we can come up with and somebody will like it. As long as you’re making quality beer, you can pretty much brew anything you want and people will accept it.”

Though his family lives in North Carolina, Barbee has had no temptations to leave the Portland craft beer scene. “[The North Carolina beer scene] is really cool and growing a lot, but it’s a decade behind the scene here,” he says. Well played, but we sense another beercation in our future.