In case you haven’t heard, you can now brew Brooklyn Sorachi Ace at home. 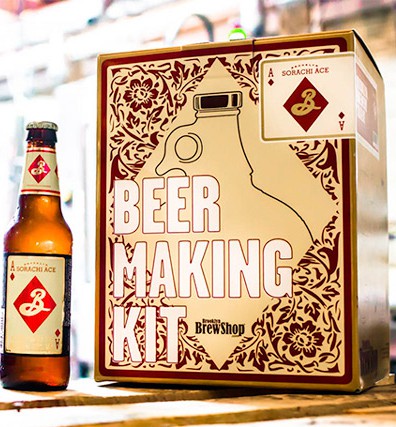 Thanks to a recent collaboration between Brooklyn Brewery  and Brooklyn Brew Shop, brewing novices and intermediate beer makers have an easy route to replicating Brooklyn Brewery’s Sorachi Ace, a saison showcasing the rare hop varietal of the same name.

Brooklyn Sorachi Ace is available online as well as at the Brooklyn Brewery gift shop in Williamsburg, Brooklyn in both kit (ingredients + equipment) and mix (ingredients only) form. Both options pack all the grains, hops and yeast necessary for brewing the esteemed farmhouse ale in your own kitchen, known among hopheads for revitalizing the Sorachi Ace hop, a quirky, long-forgotten varietal originally created in Japan in the 1970s, later rediscovered by a family farm in Washington State in the early 2000s and officially brought back into the spotlight by Brooklyn Brewery brewmaster, Garrett Oliver in 2009.