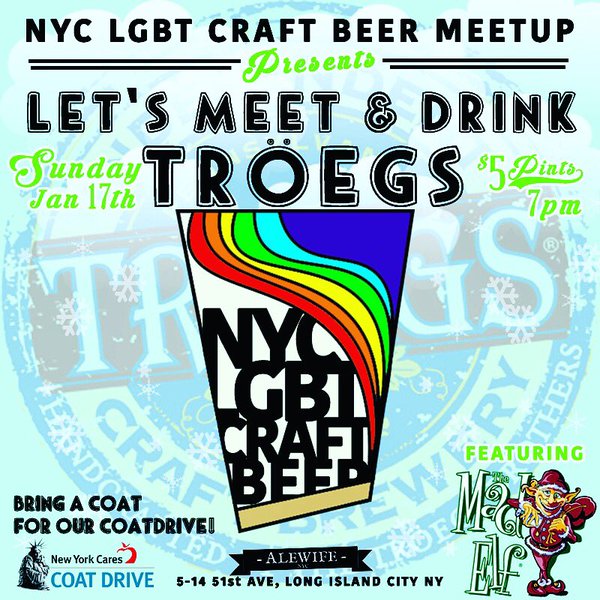 For many craft beer drinkers, it’s not hard to find a bar where one is immediately at ease, knowing that beer brethren and sistren are nearby to talk hops, barley or brettanomyces. Bars specializing in craft beer abound in New York City; apps like Untapped and Instagram connect craft beer lovers at astoundingly specific points of interest; festivals occur frequently across the country; and there seems to be a meetup group for every beer drinker, whether you’re a bottle sharing single dad in Brooklyn or a young woman with a penchant for artisanal ales.

But for some, the craft beer community leaves something to be desired: a designated group for LGBTQ beer fans, where non- hetero, binary or cis identifications are overtly accepted and celebrated. Here, members would feel they were among their kindred spirits as beer lovers, with the added comfort of a common bond.

In Long Island City, Queens, Alexa Blair Wilkinson is filling that void with NYC LGBT Craft Beer, a Meetup group created in partnership with well-known craft beer bar, Alewife. Wilkinson, who describes herself on the Meetup page as a “craft beer nerd with the heart of a unicorn,” is also an executive chef and certified Cicerone, a professional credential for serving beer and pairing it with food, similar to a wine sommelier.

Says Wilkinson in the NYC LGBT Craft Beer description, “Whether it’s friendship, a spark, a bottle share, or some nerdy yeast loving talk…this meetup is for anyone who likes or wants to learn more about the growing craft beer movement within a safe environment.”

LGBT Craft Beer meetups will include beer tastings, beer dinners, tasting competitions, charity events and seasonal parties. For the most part,  Wilkinson plans to hold the events on Sundays in Long Island City, but is open to different times and locations, the event description says.

Wilkinson’s Meetup is not only an opportunity for queers to get together for a beer, but an answer for a community that has been lacking solid stance in New York City’s craft beer scene. More than that, the group will be working with its partner venues to host charities and fundraisers; at the debut event in January, attendees are encouraged to bring winter coats for a New York Cares drive.

The debut NYC LGBT Craft Beer Meetup will take place at Alewife in Long Island City on Sunday, January 17, 2016 at 7pm. The meetup is also sponsored by Troegs Brewery, who will be donating a keg to the event. Specials for the group include $5 pints and snacks on the house, along with “a chance to get together and talk craft beer,” Wilkinson said.