Beercations are a great way to explore a new city, see what other brewers are up to around the country, and in our case last weekend, avoid New Years Eve in New York City.

We set out on a southbound journey to Richmond, where a growing beer scene (32 breweries in the greater Richmond area, and about 20 in the city itself) has warranted it a worthy destination for beer travelers. Bonus: their tourism board has been boasting the Richmond Beer Trail (#RVABeerTrail), and who doesn’t love organized beer touring fun?

Someone please tell me to stop thumbs up-ing.

Our Richmond Beer Trail journey began on Saturday, Dec. 29 with a visit to Ardent Craft Ales, established in 2014 in Scotts Addition, and area of Richmond previously known for little more than its abandoned warehouses (and later, Ardent co-founder Tom Sullivan would tell me, cheap art studios and rehearsal spaces).

Then came the big G word: gentrification. Scott’s Addition is now a neighborhood packed with craft breweries, thanks in large part to Ardent paving the way for now-neighbors like The Veil, Isley, and Three Notch’d (the latter of which has its home base brewery in Charlottesville, Virginia).

Tom and his partners, Kevin O’Leary and Paul Karns have the typical garage to riches story: their brewing roots trace back to a homebrewing hobby that got more organized when their wives wanted them out of the kitchens. When Ardent finally opened, Tom said, it was somewhere around the sixth brewery to open in Richmond, but the first to break ground in the Scott’s Addition area.

“No one wanted to be in Scott’s Addition,” he said. “No one lived here.” After they started building in 2013—the space had previously been unoccupied, and open, since the ’90s—he and his partners started noticing a change taking place. “Someone would walk by with a dog, and we were like, ‘is that person lost?'” Soon enough, people began congregating in the taproom, some with blueprints laid across the tables—they were planning their own breweries.

“The genie is out of the bottle here in Richmond.” —Tom Sullivan, co-founder, Ardent Craft Ales

Serving first as a guinea pig and now as role model, Ardent has developed its own personality and atmosphere that’s represented quite confidently in a solid yet experimental lineup of beer styles, ranging from a mixed fermentation brettanomyces-dosed IPA to a seductive barrel aged ale with honey and ginger (a bigger, bourbon-boosted version of Honey Ginger, a year-round offering).  Most recently, Ardent dipped its toes into the copycat trend happening almost everywhere: the New England-style IPA. (What else?) 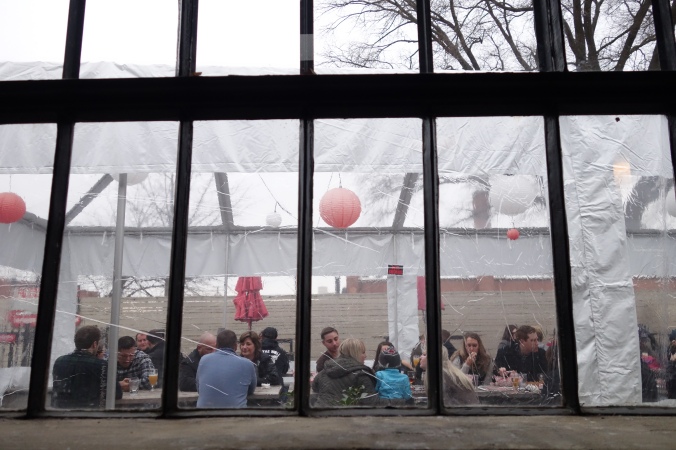 Inside, the staff prepared for a typical Saturday: customers lining up at the bar, waiting for their next pour of Ardent’s creations.

“The genie is out of the bottle here in Richmond,” he said, referring to first the Veil, then Ardent, then Triple Crossing perfecting the style. (Triple Crossing is one of Tom’s favorites in the area, and turned out to be one of ours, too.)

As Tom spoke about Ardent’s brief history, a line had began to form behind his right ear, and then another trailed off on the left, both stretching diagonally from bar to doors leading outside, to the beer garden. Even on a frigid Saturday afternoon in December, the heated tent was packed to its plastic brim. Inside the quite spacious taproom, on either side of the lines as well as between them, every table was taken. In fact, our neighbors to the left politely scootched over so we could (quite literally) squeeze in our tasting.

“That’s what it’s all about here,” said the man who had moved, bright-eyed and likely in his late 70s, while a handsome young man with a stylishly shaved head and mohawk man bun bussed his table. Settled into the space, we experienced firsthand the truth in Ardent’s origin story: people really like it here.

Typically, an ambitious lineup that spans so many styles is likely to have a dud. Not so at Ardent. Overall, what kept coming to mind even among the experimentation and variation was: balance. Here’s what we tasted.

This experimental batch was gone almost as soon as we knew we’d like more of it. Taking Ardent’s original IPA recipe (standard malt backbone, Citra hops) and allowing it time with a mixed Brett culture made for an altogether successful experiment: aromatic, citrusy nose; a brilliant copper color; a malt-forward, medium body balancing caramel malt sweetness with a healthy helping of Citra; and a pronounced, but not overpowering Brett presence cutting through that malt sweetness and fruity hop aroma with just the right amount of funk. I long for this beer as I write about it.

Ardent is clearly not all about the haze craze. Yet their attempt at style nails it. The cloudy crowd favorite is pale yellow, bright almost to the point of neon, transcending the SRM scale as we know it.

How Ardent makes their Hazy IPA:

Although it’s a twist on Ardent’s year-round Saison (which can be spotted on draft and in bottles all around Richmond), Black Saison uses a completely different recipe. This winter-appropriate take on the style is lightly roasty and earthy, and finishes dry, rather than the characteristically sweet/fruity American saison finish. (True Belgian saisons, on the other hand, tend to finish dry.)

Chocolatey, lightly sweet and warmed with a touch of whiskey and oak, this takes Ardent’s Imperial Milk Stout and ages it for six months in Buffalo Trace bourbon barrels. It’s a very tasty example of the style without being overdone, expertly avoiding the sweet and heat of most imperial stouts that push 12% ABV.

After our official flight lineup, we were introduced to the bourbon barrel-aged version of Ardent’s year-round Honey Ginger, a spiced beer that jumps from 7.8% to 11.5% ABV in its barrel-aged version (aged in Buffalo Trace barrels for six months). Although seductively spiced—so fragrant with honey, ginger and bourbon that at first, my thought was ‘candy’—it’s also sensibly executed, offering equal parts malt, spice and barrel. It definitely doesn’t drink like your typical 11.5%-er…I took this one on our tour of the brewery and never tired of taking sips.

The tour of the brewhouse was full of the usual suspects: brew kettles, mash tuns, hot liquor tanks, fermenters, bags of grain. Notable, though, was the palpable notion that Ardent Craft Ales is ready to expand, poised for growth not only in its own space—where it recently added a row of 60 bbl fermenters, and made space for more—but very likely to an outer facility in the near future. 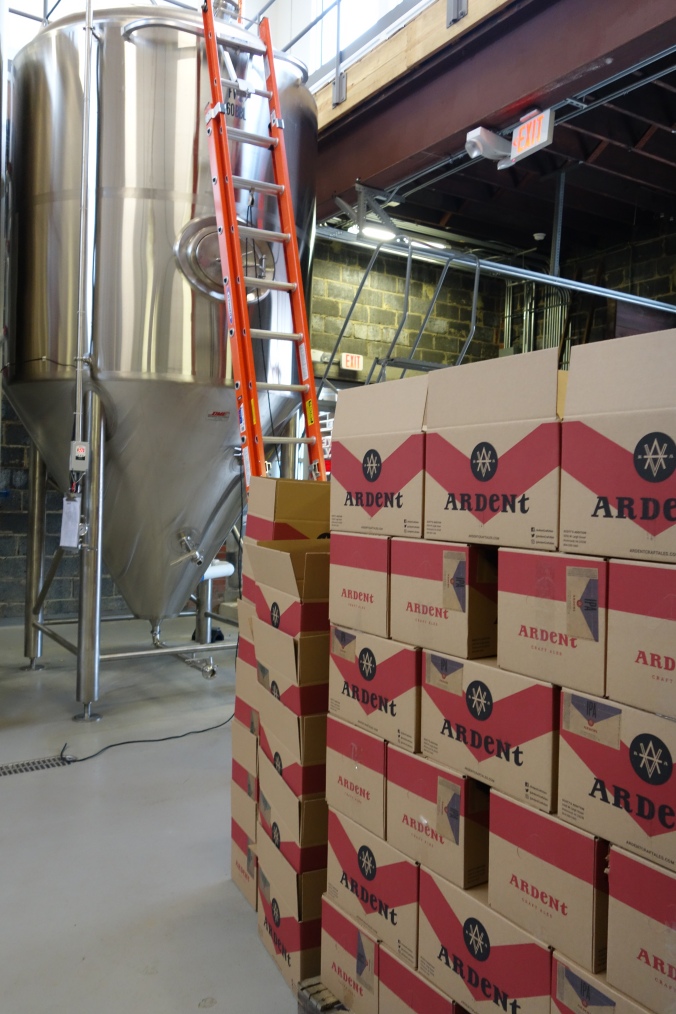 Tom Sullivan waxing poetic about the good and evil of expansion. 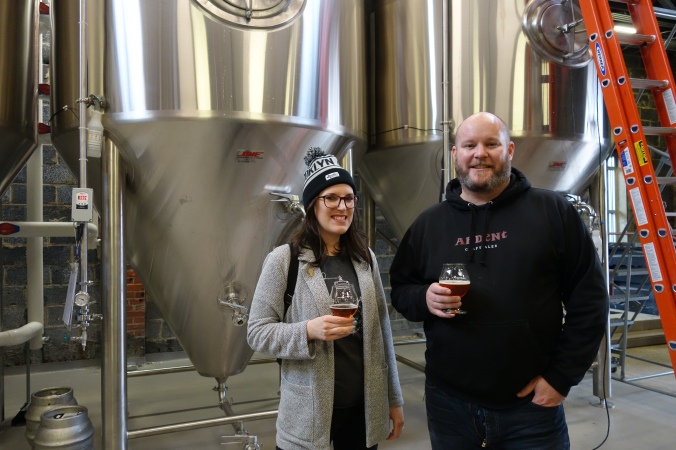 Tom Sullivan and I cheesin’ in front of Ardent’s new 60 bbl fermenters.

Tom is no money hungry brewing tycoon, though—in fact, he said, he just wants to stay put. “I want to be done expanding and just stay in one place and make beer,” he said. His honesty in that moment was not missed by Pat or I, who left feeling like Ardent showed its true colors, both of its beers and its status/strategy.

After our brewery tour, Tom was nice enough to take us over to the barrel house, where all sorts of funky experiments are quietly fermenting. This included stouts in Buffalo Trace barrels, sour blondes, and a small section of (very large) wine barrels.

Many of Ardent’s beers are aged in Buffalo Trace barrels.

A glamour shot of barrel-aged Honey Ginger in the barrel house.

Like most breweries, Ardent experiments with mixed fermentation by repurposing yeast strains from funky favorites: the lineup here included bottles from Bruery Terreux, Captain Lawrence, and a collaboration beer from Sierra Nevada and Boulevard.

Ardent is also playing around with wine barrels, which tend to be larger and lighter in color than bourbon barrels.

This would have been funnier if Tom’s name was Frank, which it isn’t.

Our barrel-surrounded meditation concluded with a photo op I could not resist: Tom beside his buddy, Frank the Tank.

Map of the City of Richmond, published by Studio Two Three

After an information-packed and palate pleasing tasting and tour, we parted ways to continue on our journey of the Richmond Beer Trail.