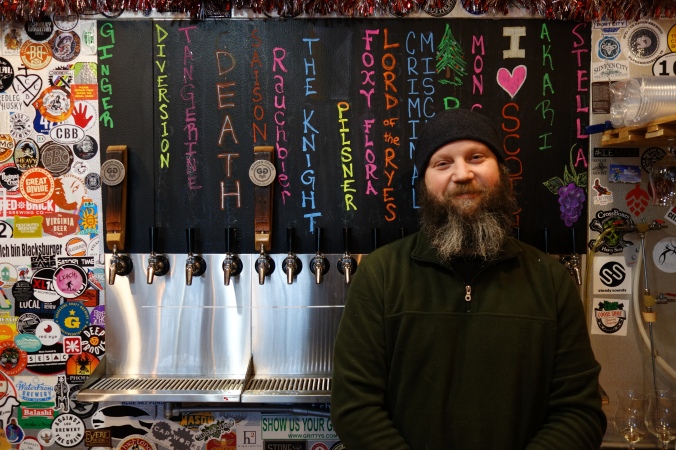 I spend a lot of time visiting breweries. A lot. It may have something to do with the fact that I’m a beer writer, but in all honesty, I’d probably be doing it anyway.

Every time I walk into a place where beer is born, I walk in with fresh eyes, and I’m pretty much just as excited every time. But certainly, there are standouts, and every now and then, a place will strike me as special. Special not necessarily because of its success or its status, but because of a feeling I get when I spend time there. In Richmond, that brewery for me was Garden Grove Brewery and Urban Winery.

Garden Grove‘s cottage-like structure is attractively old-fashioned and artichoke green, giving a humble and natural impression among an equally quaint row of businesses in Richmond’s Carytown. It fits in so well here, you might miss it, or mistake it for one of many high-end thrift stores dotting the block.

Inside, it’s cozy, but doesn’t immediately give the quintessential impression brewery or taproom. Upon a closer look, yes, there are the taps; the colorful chalkboard menu; the board games; barrel-shaped bases to wooden tables of various shapes and sizes. There are dogs, lots of them, and their white owners in winterwear. There are even a few branded merch items hanging on the walls. Everything works in a sort of homey harmony, but nothing really stands out.

That is, until I peruse the beer menu. Eyes flitting up and down the page, I get stuck on a few phrases: “Beer/Wine Hybrid.” “Mead/Sake Hybrid.” This marks the moment I get excited, a feeling that lasts the entire hour and a half we spend here.

Push past Garden Grove’s deceivingly generic facade, and you will be rewarded with a secret treasure trove of beverages beyond what you’ve imaged possible.

Indecisive by nature and overwhelmed with curiosity, I chat up the bartender, Aiden, who is as eager to educate me as I am to be guided. I sip a few samples, then decide on two half-pours of what had initially caught my eye: 2015 Akari, the aforementioned mead/sake hybrid; and Criminal Mischief, the beer/wine hybrid. These beers—or wines—or whatever they are—blow my mind. They’re shocking, strange, pleasant, sweet, savory, sophisticated and playful all at once.

2015 Akari is made with alfalfa honey and rice and aged 22 months in Chardonnay barrels, and it is delicious. I inquire immediately about this one, and learn it was a complete accident, an experiment gone wrong, then right. This is probably the best thing I drink all day, or at least my favorite.

Criminal Mischief, the beer/wine hybrid, is intended to resemble a Vermouth, which makes sense after sipping a few times. It was created in collaboration with T. Leggett, head mixologist at the Roosevelt. It balances sweet and savory notes, as if a Vermouth were lifted by a lighter mouthfeel and a delightful, fizzy carbonation.

Aiden tells me Mike is on his way, so a group of friends and I settle in and munch on the available snacks—meat, cheese and crackers, each served in its original packaging—and we take in the flavors and feelings of the moment.

Mike Brandt, brewer, winemaker and co-owner arrives, fitting the bill for “brewer”—big, bearded, and beanie’d, his appearance is not exactly shocking. But there’s something about him that makes a mental note pop up and stick itself to the back of my mind, telling me to put my first impression on hold. As we shake hands, I get the sense that like Garden Grove itself, there’s something hidden behind this exterior.

He turns out to be one of the most interesting brewers I have ever met. And his liquid? Beer, wine, or hybrid, it’s some of the best stuff I’ve tasted in recent memory.

Grain and paint at Garden Grove Brewing and Urban Winery.

Getting to Know Garden Grove With Owner/Brewer/Winemaker, Mike Brandt

Garden Grove operates on an electric 3 barrel system, a setup that allows for exploration and taproom-focused experimentation (aside from one promotional run of their Farmhouse Saison, they don’t distribute, Brandt tells me).

Mike points out the major components: fermenters, one of which has hop nets and a comically scrawled “NE IPA” sign hanging from its neck. I immediately know he’s not the NE IPA type, and make a mental note to inquire about this later. There are wine barrels, American and French oak, all of which previously stored Cabernet Sauvignon, Pinot Noir, Syrah, Cabernet Franc, or Chardonnay.

He prefers American oak over French oak, and he gets his grapes from a family vineyard in the Blue Ridge Mountains. A color drawing of the vineyard hangs on the wall. I ask who drew it, thinking again of the childish NE IPA sign. He must have kids. “I did,” he says.

Snuggling up to the barrels, various sizes of glass jugs are full of fermenting red wine, likely awaiting their turn to blend and bloom a brand new Garden Grove creation. Mike is rattling off ultra-specific grape, grain and yeast selections and interactions as if they’re common knowledge. Clearly, to him, they are.

Red wines await their turn in the barrel. 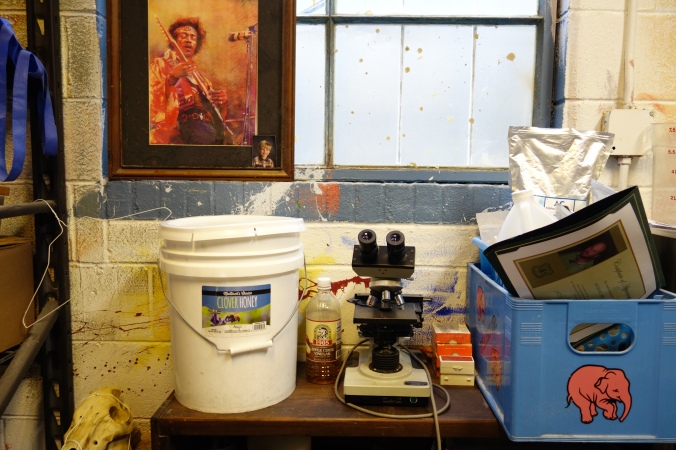 ‘The Lab’ at Garden Grove Brewing and Urban Winery.

If Garden Grove is a secret garden, Mike is its keeper, and his hybrid knowledge of beer and wine fermenting processes and outcomes is the key. Much like the fruity, funky flavors that result from a well-behaved wild fermentation, this seems to come naturally.

Of course, it’s not all magic: he didn’t get here without putting in his time, first as assistant brewer at Calhoun’s Brewery in Harrisonburg, Virginia, then at various stints in the Virginia wine scene, eventually leading to a position as head winemaker and viticulturist at Naked Mountain Winery & Vineyards in Markham, Virginia, as well as assistant winemaker at Linden Vineyards.

He then turned to academics, adding to his hands-on experience with a Master’s degree in environmental studies from Virginia Commonwealth University (VCU), then studying fermentation and plant sciences as an agricultural research scientist at Virginia State University (VSU). Basically, he’s well-versed in wine, beer, cider, mead, and any fermentable science or art, or combination thereof, that you can think of or would never dream of. 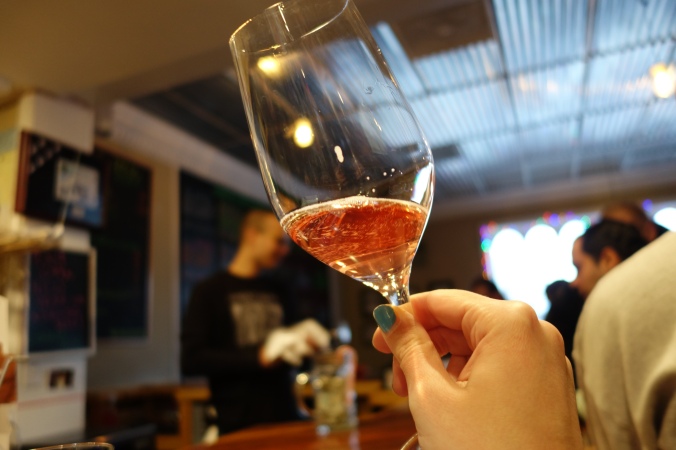 Foxy Flora, a sparkling honey wine made with fruits and flowers.

Back to the beer. After the short “tour,” Mike is generous enough to taste Pat and I through everything we can handle on tap, rapid-fire pouring and explaining the story behind each of his concoctions (and by story, I mean hyper-specific ingredient choices and treatments). One after the other, pour after pour, I find myself in a continual state of bug-eyed, head-nodding awe.

This was my favorite thing, having a huge impression on me due to its pure weirdness and serendipitous deliciousness. Akari, as mentioned before, is a mead/sake hybrid aged 22 months in Chardonnay barrels. It was made with alfalfa honey and rice, aged for a time, and came out terribly. After almost another year, abandoned and forgotten, the concoction came to life. On our visit, it looked and drank like a light white wine with enhanced botanical notes and sake flavors, with a light acidity that was bright and burn-free. It reminded me a bit of the tinctures by Enlightenment Wines at Honey’s in Bushwick, Brooklyn.

I knew I was going to order this one as soon as I saw its “style” description on the menu: beer/wine hybrid. This one’s got sweet, heat, and umami, like a Vermouth with less heat and a delightful tickle of carbonation. it’s also a looker: a clear, peach iced-tea color enhanced the overall experience.

A bit intimidating, Death is like a Belgian quad that wants to be a red wine. Rich, fruity and dark, it was made using Virginia Petit Verdot grapes from Garden Grove’s vineyard at Arterra Winery, then aged 10 months in Syrah barrels. It was a little much for me, but I respect what it was going for.

This is no ordinary Chablis.* It’s more like a Chablis-grown Chardonnay/mead hybrid, if you can call it such a thing, which you probably can at Garden Grove. But they came up with a better name: Mon Cheri Chablis, described by Garden Grove as a sparkling Pyment (fermented with grapes and honey) crafted with Virginia Chardonnay grapes, clover honey, and another weirdly key ingredient—Virginia oyster shells.

Why the oyster shells? Chablis is known for its mineral-rich soil content of limestone, clay, and fossilized oyster shells. To invoke that minerality, Virginia oyster shells were added during fermentation, and they do the trick.

*Chablis is also a dry white burgundy wine from Chablis in eastern France.

It may seem odd to go from Chablis to Rauchbier, but the progression made perfect sense:  Garden Grove’s Rauchbier is also made with Virginia oyster shells. The unique ingredient gives this rich, but refreshing smoked beer a briney umami that works great—salt and smoke in perfect harmony.

My love, my muse. I’m not one to #roseallday, but this beer (if you can even call her that, for she is so much more) changed my perception on pink fizzy drinks. Bright, pale pink and bursting with strawberry aroma and flavor yet light and thirst quenching, Foxy Flora fun to drink, period.

Stella, in Mike’s words, is a grown up version of Foxy Flora. Closer to a true rose, it’s another pyment (grape and honey wine) made with Virginia Summer thistle honey, Virginia Petit Verdot and Vidal Blanc grapes, and aged for 6 months in red wine barrels. The unusual choice of Vidal Blanc grapes gives Stella a unique floral quality that I, and Mike himself, found difficult to pinpoint, but that works really well.

When I say this beer was made with duck bacon, that’s a diminished description. First of all, it’s Scotch-infused duck bacon. Secondly, this wasn’t thrown into the mash, or even the barrel (fat + beer = bad). Instead, it underwent an absurdly lengthy process of rendering, dehydrating, freezing and fat skimming, eventually leaving nothing but the pure essence of scotch-flavored smoked duck meat.

It’s worth noting that Mike wasn’t alone on this one—the beer was a collaboration between Garden Grove and Rouge Gentleman  executive chef, Will Longoria, and the Laphroaig scotch-infused duck bacon was formulated specially for the beer by Chef Longoria. Oh yeah, and it was aged in red wine barrels.

Sound crazy? That’s because it is. The beer, however, belies little of this insanity. It drinks like a strong scotch ale with a bit of something extra—a little smoke, perhaps, a bit of maple-bacon sweet-savory play, and a lot of love.

This is the outlier at Garden Grove—a relatively normal, though very tasty, IPA made with tangerine puree. Super fruity, definitely juicy, and with a nice bitter finish that reminds us that even a semi-attempted “juice bomb” or “NE IPA” can have a bit of balance.

Finally, we finished it off with a sip of the Czech pilsner, a pillowy, bright and bitter rendition that hit the spot and felt like a good place to conclude our head-spinning tasting. For good measure, I took a growler of this one to go, along with my new mistress, Foxy Flora. 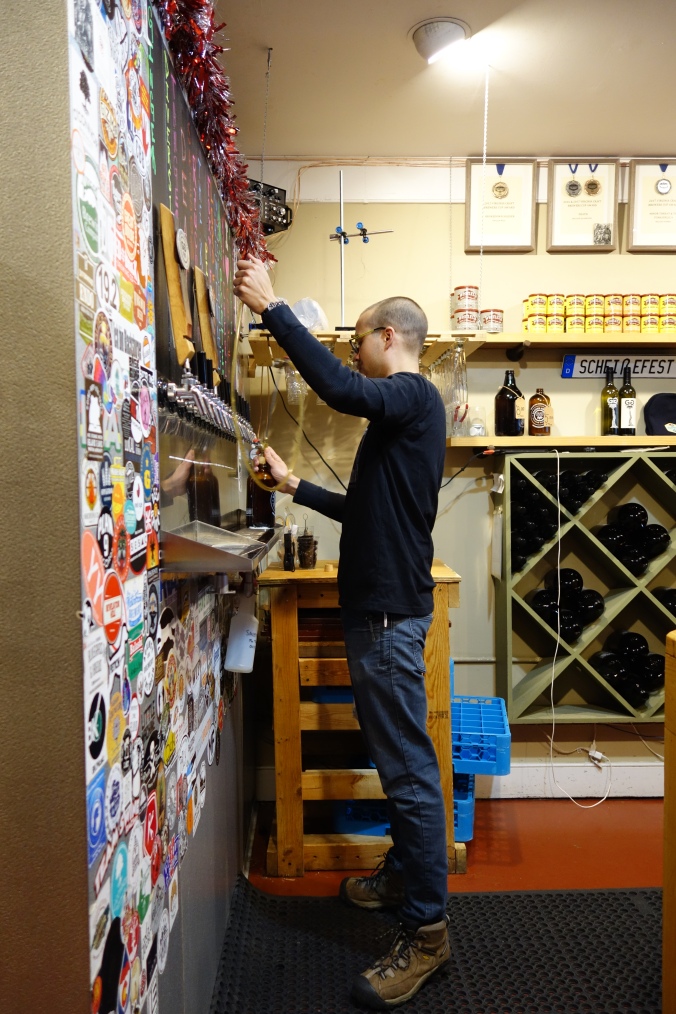 Growler fills are intense at Garden Grove, and it pays off.

It all happened so fast, and I wish I’d come away with more sexy photos of beers, wines, and hybrids. Instead, I sign off with what I hope is a seductive piece of advice: go to Garden Grove. You won’t regret it, and you won’t forget it.