Along with a few freaky costumes and a brief tour of the recently developed space, the week-long beer affair began with an impressive lineup of brand new brews, a handful of which will also be debuting at bars such as d.b.a. (Tuesday, Oct. 27), The Allie Way (Thursday, Oct. 29) and New York Beer Company (Saturday, Oct. 31) throughout the week, and the rest, for the time being, available only at the brewery.

“What we’re trying to do here is create a spectrum of beers,” said Adams, the brewery’s operations manager and self-proclaimed stout lover. “We [want to get] as Coney Island as we can get.” 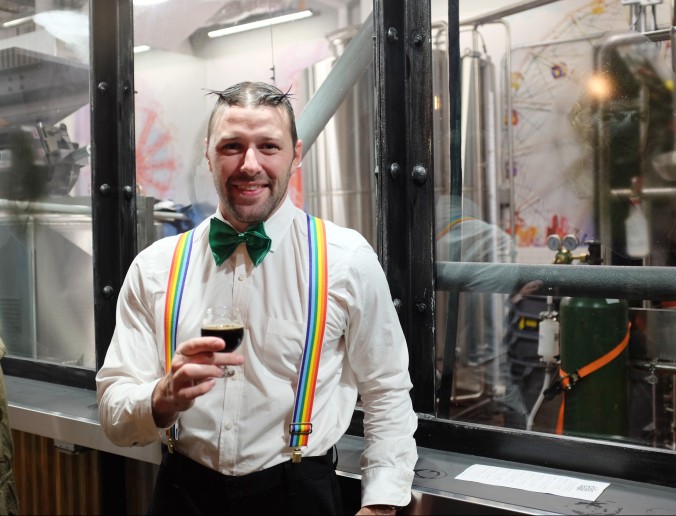 Chris Adams (pictured with his “baby,” the NY Honey Stout) took on a familiar guise for Freak Week’s kickoff.

To get “Coney Island,” Adams and head brewer, Eric Hernandez spent considerable time walking the Coney Island boardwalk drawing inspiration for new beers from the neighborhood. “We literally walked down the boardwalk scribbling down ideas,” Adams said, with standouts such as a community-influenced Russian Imperial Kvass and an as-yet-unannounced Cotton Candy Kolsch making the lineup. “You’re always going to find something new here.”

Hernandez  is equally excited about the brewery’s special releases. “With this playground, there’s no reason not to get weird,” Hernandez told us, the “playground” being a custom-built, 10 bbl system that takes up about half of the brewery’s 1,500-square-foot space.  The brewery will pour standards like their Mermaid Pilsner and new Hard Root Beer, but many of the lines will be devoted to trying new recipes as each batch runs out. Hernandez has brewed 12 different beers in the last six weeks—the brewery was built between April and August and opened on September 4—and 13 more recipes are ready to roll. “I’m trying for 40 by the end of next year,” he said.

According to Adams, the taproom has been selling “a crazy amount of growlers” to locals and fans who have stopped by to check out the new space. However, he hopes to attract more patrons to the outdoor beer garden in spring and summer, when the brewery was originally scheduled to open. “We want it to be more of an intimate experience with the beer inside and fun in the sun outside,” Adams said. “I can’t wait until summertime to see what we can be.”

A double flight ensured we were able to get a taste of each new brew.

As for the beers, our flight began with the Russian Imperial Kvass, the first nitro to go on tap at the brewery. The beer, which is a respectful nod to the area’s Russian community, was brewed with 30 loaves of rye bread from New York Bread on nearby Neptune Avenue.

Following the Kvass was the Warrior IRI, a high-alpha hopped red ale with three additions of warrior hops rounded out with a nice malt balance; a Pumpkin Spice Berliner Weisse, with 30 pumpkins chopped and pureed for its making; the New York Honey Stout, brewed with 35 pounds of local honey from Better Bee Farms in Greenwich, N.Y.; and a Pale Ale, “half-filtered” and kegged just the day before with the fruity aromatics of Nelson Sauvin, Cascade and Amarillo hops bursting on the nose and palate.

“Everything I do here has a balance to it, even if it’s really aggressive,” Hernandez said. 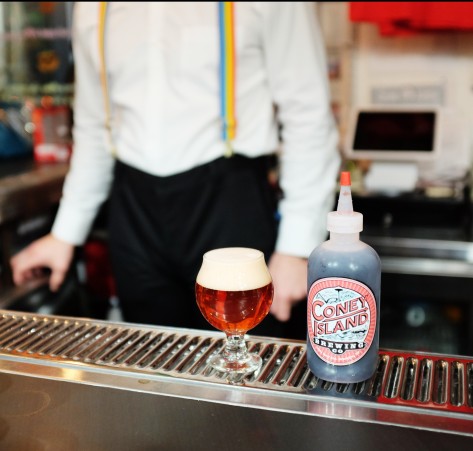 The Blood Berliner Weisse is colored with natural dye made from cochineal.

Though the brewery unfortunately opened its doors before the oncoming cold, Adams is optimistic about reaching more customers. “We’re ready for next season. It’s going to be awesome,” he said.

Give the taproom a visit while it’s in its beginning stages—you won’t get a fresher take on the excitement of a brewery launch with the backing to fund unhindered pilot batches and possible one-off projects. Until then, check out the Freak Week events happening through October 31st, or look out for the duo at the Polar Plunge this winter—they’ll be brewing up their ginger-spiced winter seasonal for the after party.