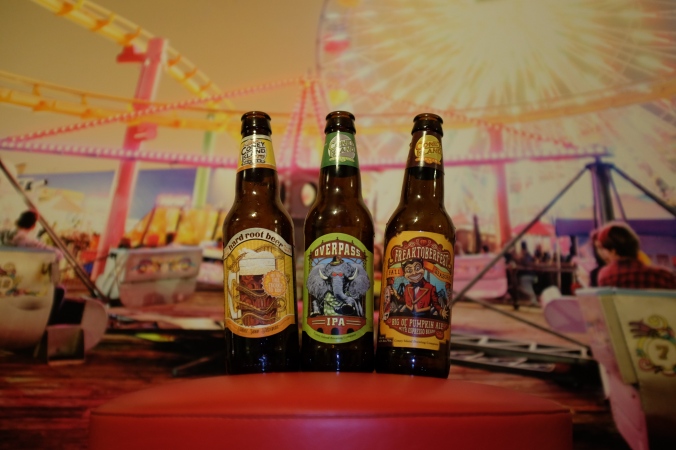 Recently, we sat down with three beers* from Coney Island Brewing Company: the Hard Root Beer, Overpass IPA and Freaktoberfest. It’s worth nothing that this tasting took place before Coney Island opened its new brewery and taproom on Surf Ave. last month, and these beers tasted completely different than the fresh-brewed beers we tasted on site.

This beer is described by Coney Island on the bottle as having “hints of vanilla, licorice and birch.” The presence of these flavors is no hint. Rather, an assault of sweet root beer flavors, impaled by a vodka-like heat,  is at play here. Vanilla and licorice are front and center on the nose and palate. Overall, it tasted like something I’d drink out of a plastic bottle in the park in high school (note: this includes the warm vodka).

Wondering why there’s an elephant on the Overpass IPA? The label is a reference to Brooklyn’s DUMBO (Down Under the Manhattan Bridge Overpass) neighborhood, where bohemians of yore built a community of performers and large African animals. While that might not be true, this is: Overpass has a sticky, resiny aroma with pine and citrus competing for your nostrils. That battle doesn’t quite carry to the palate, where the flavor is floral at first, then more like the stem of a flower — bitter and earthy.

Freaktoberfest Big Ol’ Pumpkin Ale With Espresso Beans had me buzzing with excitement (see what I did there?). Beer! Gourds! Espresso! All good things.  This one was interesting, but after careful consideration, I imagine it’d be hard to get through a pint. It’s bitterness on the backend might mellow out  at a warmer temperature, but espresso does better in a stout or an Ithaca Coffee IPA.

*Full disclosure: these beers were sent to BeerAffair for review.