As far as beer trends go, fermenting a skillfully brewed beverage with the right amount of the right strain of brettanomyces yeast is one we can get behind. Luckily, the latest to join the Brett train, Victory Brewing Co., has decades of brewing history in its brew boots, and with their track record in crisp, well-balanced, German-inspired ales and lagers that tend to stay on-trend without going overboard, we’re certainly interested to see what the brewery has done with Brett in their recently released, boozed-up Belgian Dubbel: Tart Ten.

As I learned at a recent beer dinner hosted by Victory and Artisanal Brewing Ventures (ABV, the parent company of Victory and Southern Tier), Victory is no newcomer to the Brett strain: in fact, according to founder and brewmaster, Bill Covaleski, the brewery has been developing various strains of Brett for the last 10 years.

Named for its up-there alcohol content of 10% ABV and tartness imparted by fermentation with the Brettanomyces yeast strain, Tart Ten is a “strong, refreshingly zingy, tart-tingly Belgian Dubbel ale,” according to the brewery. The beer, it would seem, marries European tradition with American in-your-faceness, implementing a relatively simple recipe of Pilsner and Caramel malts and Czech Saaz hops (classically found in Czech pilsners), followed by fermentation with non spore-forming Brettanomyces, resulting in sharp acidity, funkiness and rich malt flavor while remaining light in body, the brewery said.

“Our thirst for creativity is only seconded by our literal thirst for a great-tasting, uniquely special beer that can boldly stand out on its own,”said Bill Covaleski, Victory founder and brewmaster.“Challenging our fans to taste something new is how we fulfill our professional ambitions.” 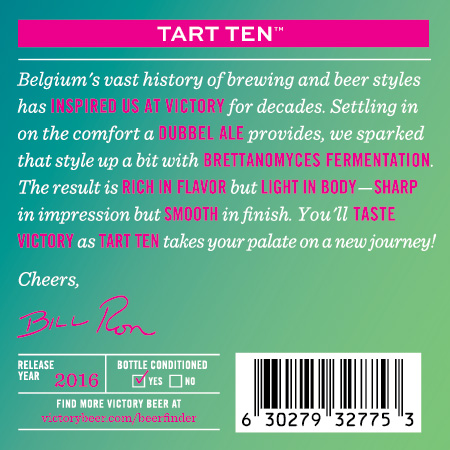 Tart Ten is available on draft and in cork-and-cage 750 ml bottles in 37 states. Find it with the free Victory mobile app for Android and iPhone.