Sonya Giacobbe is the better half of KelSo, a Brooklyn-based beer company that launched in 2006 with Kelly Taylor, husband and overseer of the Heartland Brewery restaurant group (the “Kel”) and Giacobbe (the “So”) at the helm.

Recently, KelSo was awarded the Brooklyn-Made Gold Certification from the Brooklyn Chamber of Commerce for producing local ales and lagers that meet the Gold qualifications of being headquartered in Brooklyn, staffed in Brooklyn and most-if-not-all made in Brooklyn. The Clinton Hill-based beer company’s products (KelSo Pilsner, KelSo Nut Brown Lager) are now available on draft and in cans up and down the East Coast from Philadelphia, Penn. to New London, Conn.

Along with co-running the KelSo show, Sonya previously served as director of the Simon & Schuster and Machete Speakers Bureaus of the Greater Talent Network.

“You don’t need to push the envelope to make a memorable beer. I want to be able to have two beers with dinner and still be able to give my kids a bath.” — KelSo of Brooklyn, Josh Bernstein, Edible Brooklyn Spring 2011: Issue No. 21

Cheers to that, Sonya!
– Beer Affair 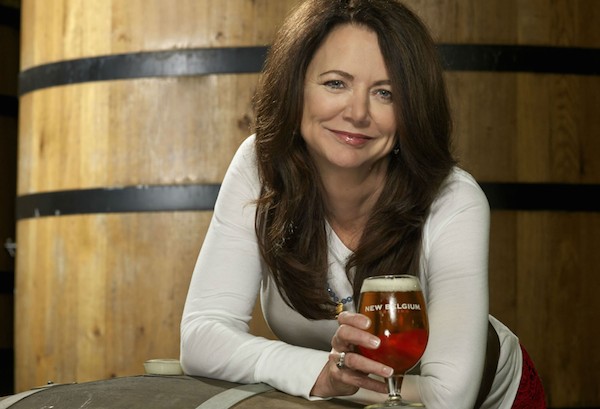 Kim Jordan has more than 25 years’ experience in the craft beer industry. As co-founder of New Belgium Brewing Company (est. 1991) and having served as CEO for 15 years, she has strengthened the brewery and craft beer community at large as a leader, speaker and expert in all things beer biz. Jordan recently transitioned into a new role as executive chair at New Belgium, setting her sites set on strategy and  advocacy for progressive business practices both within the New Belgium Family Foundation and on the 1% For the Planet Board of Directors.

Cheers to that, Kim!
– BeerAffair

In January 2014, I had the pleasure of meeting the legendary Christine Celis at a (Very) Rare Beer Night organized by Pintley at Lower Manhattan’s Clinton Hall. Celis was rambunctious, well spoken and outwardly excited about her recent exploits into gypsy brewing, her beer company in Austin, Texas, the rare Belgian beers she had curated for the event that night, and of course, the legacy of her father, Pierre Celis.

As heiress to one of the world’s most popular beer brands, Hoegarden, Celis had a hand in bringing the Witbier style back to the United States in the 1990’s. Since then, she’s taken over the family brewery, imported an impressive portfolio of Belgian beers, joined up with a brewpub in Austin and sent her amazingly positive vibes into the craft beer and brewing community across the country.

“The thing about success is, sometimes we don’t know how we got there. With failure, you learn a lot. You learn why you failed, how you failed, and how you can prevent the same failures. Then, success just comes.” — Christine Celis – Brewmaster’s daughter, businesswoman and balance seeker, Coffee With a Stranger, melissalombard.com

Cheers to that, Christine! 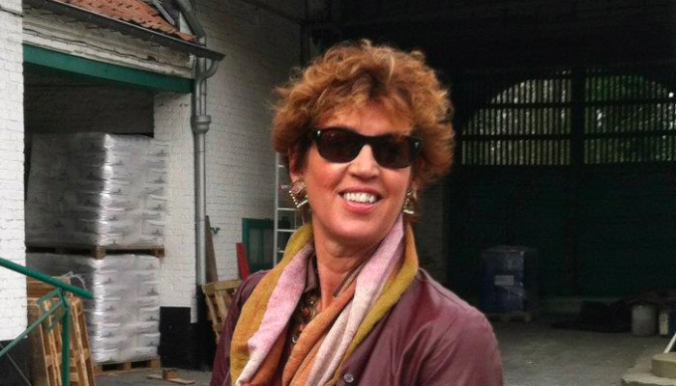 In honor of Brewery Ommegang’s 18th birthday next month and my departure for Belgium today, this week’s #WomanCrushWednesday goes to Wendy Littlefield. Along with her husband, Ed, Littlefield’s accolades go far beyond a bulleted list. From a romantic start of eloping in college, moving to Belgium and falling in love—with the tradition and taste of Belgian beer, that is—she became the first American woman inducted into the Belgian Brewers Guild and was nominated for the Mercurius Award, the highest civilian honor bestowed by the Belgian government.

Back stateside,  in addition to starting two beer businesses, she started several community-driven food and drink events and associations in her now-hometown of Cooperstown, N.Y. (Belgian Comes to Cooperstown among them). You can learn more about the Littlefields in the self-told “Very Long and Boring Story” of  her career in beer—a lengthy one, yes, but there’s nothing boring about it.

“We have been at this business for 31 years and still adore it, and we are still married and capable of working together. How very fortunate we are. We think of ourselves as cultural anthropologists explaining culture through beer.” – “Why We Do What We Do— An Interview With Our New York Distributor,” March 2012, BelgianBeerExperts.com

Photo via The Daily Meal

Carol Stoudt is often touted for being a craft beer pioneer,  and not only as a woman—she was crowned “Queen of Hops” (a media-given title) as the first female brewmaster and brewery owner in American history post prohibition, but was also one of the first brewmasters and brewery founders of that time, starting her business in what was arguably the most important year of the craft beer revolution, 1987. Filling rolls that were hardly there to be filled, Stoudt showed the country that craft beer belonged here, and she’s continued to do so for the last 28 years.

“My advice to anyone wanting to get in the business is to work in a variety of types and sizes of breweries or restaurants, as well as sales, if one is planning a micro. One needs not only passion but a willingness to work hard in all areas.” – Journey to the Beer Store, April 11, 2013

As the Brewers Association editor-in-chief, Jill Redding is responsible for overseeing the bi-monthly publication (every two months) of Zymurgy,  a magazine “for the homebrewer and beer lover” which informs amateur beer makers on trends, best brewing practices, award-winning recipes and industry events, and the New Brewer, “a passionate voice for craft brewers,” created to provide commercial startup breweries with information on topics like brewing technology, problem solving, and management.

The Brewers Association (BA) is a non-profit trade association established “to promote and protect American craft brewers, their beers and the community of brewing enthusiasts.” In addition to its publications, education, insights and statistics pertaining to the craft brewing industry, the BA is responsible for major industry events such as the Craft Brewers Conference, Great American Beer Festival, SAVOR and World Beer Cup.

“Kudos to all homebrew clubs for teaching the world to brew, and for giving back to their communities!” — Brew’s Up, Indeed, Zymurgy Vol. 38 No. 5

“Our craft breweries are small businesses that have helped bring great innovation and a less gender-targeted approach to beer marketing than ever before—I’ll cheers to that!” – Weighing in on Women and Beer, craftbeer.com, Aug. 2015

Cheers to that, Julia!
– Beer Affair

Now in a millennial world, it’s not so surprising that women are joining the beer community in troves, stepping onto the scene as sales representatives, marketing coordinators, reporters (ahem) and imbibers, and—although they are still few—brewers and brewmasters.

But before there were us gals who started appreciating good beer post-2000 (although we still may feel uniquely, utterly female in a scene that continues to be dominated by beer guts and beards), there were women like Mellie Pullman, who I’d like to spotlight for my first #WomanCrushWednesday (#WCW) post here on Beer Affair.

I do not mean this in the literal or romantic sense, as I’ve never met Pullman personally, I mean it simply in the sense that my “love affair with beer” (where the name Beer Affair came from) is due in part to women who flew their freak flags high before it was popular, or even possible, for gals like me to be a part of the beer community.

After re-reading a feature written by Tara Nurin in Craft Beer & Brewing last month, “Replanting the Seeds of Brewing,” I was reminded of all of the women I have yet to meet, the history I have yet to learn, and the amazing strides women have made in this still-young industry since it began its second wind in the 1980s.

As a young woman swept up into the romance of the craft beer world just five or so years ago, I have to acknowledge the true pioneers before me, and commend these ladies for stepping up to the plate when it was even harder to be a female in a male dominated business like beer. (Or, as Nurin phrases it, for each woman who had to “finesse her way out of enough brewer-as-bearded-German-guy stereotypes.”)

In the days before national women’s industry groups like the Pink Boots Society (and in my case, local groups like the Beerded Ladies), these gals were among the first to explore the beer business, truly planting the “seeds” that sprouted roles for women in the brewing industry today. Among the “firsts” these femmes accomplished, Pullman is particularly #WCW-worthy for the following:

1. She was first female brewmaster in contemporary U.S. history;

2. She helped bring Utah its first brewery, Wasatch Brewery, in 1986; and

3. She lobbied to modernize the alcohol laws in Utah which were, even up until the late 80s, quite restrictive.

Beginning with Pullman and moving through the significance several more, Nurin’s article attributes beer props to Beth Hartwell, who co-founded Hart Brewing in Kalama, Wash. (now Pyramid Breweries) in 1984; Rosemarie Certo, who co-founded Dock Street Brewing in Philadelphia in 1985; Carol Stoudt, who became the nation’s first female sole proprietor-brewer in 1987; Barbara Groom and Wendy Pound, the first female ownership team in the industry, who opened Lost Coast Brewing in Eureka, Calif. in 1990; and Teri Fahrendorf, currently specialty malt account manager at Great Western Malting in Vancouver, Wash., who entered the industry at 1988 as a brewing intern and now has 19 years’ experience as a brewmaster and brewery supervisor at various locations.

Although you can take the woman out of the brewing industry (according to Nurin, Pullman left her post at Wasatch just three years after co-founding it), you can’t take the brewing industry out of the woman—Pullman is now serving as an associate professor at Portland State University, where she teaches several courses in the Business of Craft Brewing Certificate program.