‘Wabbit Saison’ and ‘To Much Blueberry’ Launch at the Hill-Side for That’s Odd, Let’s Drink It Series 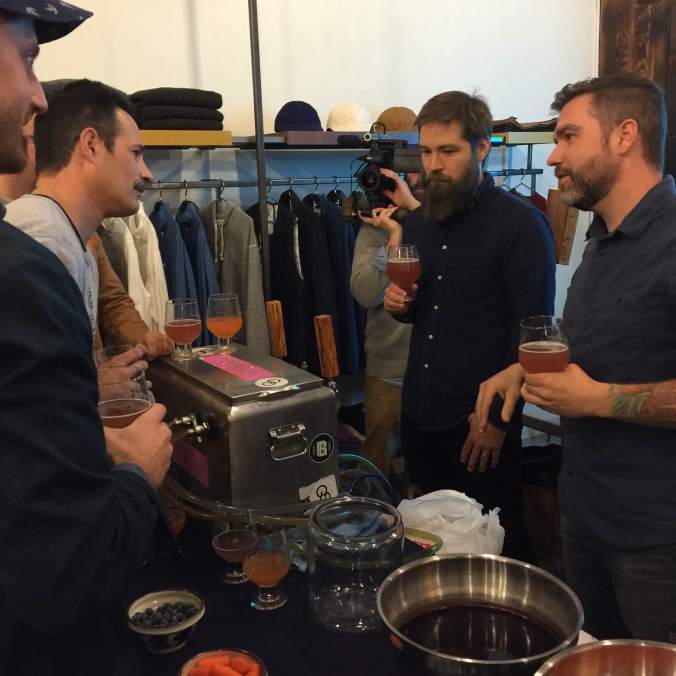 The brewers and designers had conceptualized a recipe last month to brew for the beer-meets-pop-culture web series, aiming to create a style that could be naturally dyed with two different colors. Brewing took place at Other Half’s brewery in Gowanus, Brooklyn and culminated yesterday evening with the revealing of two versions of a saison-style beer: one, a bright orange brew fermented with carrot puree, and the other, a subtler saison with a purpleish hue, fermented with blueberries.

The two beers, which were pitted against each other in a carrot-versus-blueberry standoff, were voted on by the crowd and discussed “craft beer confessional” style as part of the shoot in the back of the store. You’ll have to watch the episode to find out which beer won, but I will say this: the two brews will cleverly be called “Wabbit Saison” in honor of the carrot-loving cartoon, Bugs Bunny and “To Much Blueberry,” a reference to a negative review seen by the Hill-Side in which an Internet reviewer’s misspelling of “too” inspired a sort of salute to lots of blueberry.

According to the brewers, these beers will be made again and sold in bottles at the brewery and potentially at the Hill-side store, so keep an eye out for some brightly hued brews coming out of Other Half sometime next month or next year.